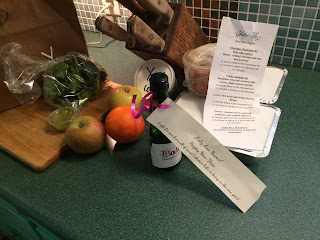 New Year's shout-out to the Great Plates Program, which obtains grants for local restaurants and catering services to keep their cooking staffs employed creating weekly meals to be delivered to area seniors who may need a break from cooking.

Lucky me, they hooked me up with Colectivo Felix, a catering kitchen run by chef Diego Felix, who delivers substantial dinners with a fun, inventive Latin American accent. (He hails from Argentina.)

Goodie bags typically contain a small bag of salad, dressing, and fresh fruit, alongside the meals. One of my recent faves was the Argentine Christmas Dinner (roast loin of veal with creamy tuna sauce). There have also been some holiday surprises: a little cup of Christmas cookies; a split of sparkling Sauvignon Blanc for New Year's Eve.

Each delivery comes with a menu and a delivery schedule for the next week. (They will also deliver breakfast and lunch, although I like to do those for myself.)

Calling themselves Culinary Troubadours, the folks at Colectivo Felix cater all sorts of private gatherings (when such things were still possible, and hopefully will be again), and offer various goodies to go four days a week, through their website, among many other activities. They also participate in the Empanadas For Farmworkers campaign, cooking and delivering empanadas to farmworkers in the field, courtesy of local sponsors.

Since I actually do like to cook (when I'm up to it), I've been meaning to see if I can arrange to get a few less meals a week. No point in being greedy! But the food is so good, I haven't done it yet — I don't want to miss anything!

Posted by Lisa Jensen at 5:07 PM No comments: 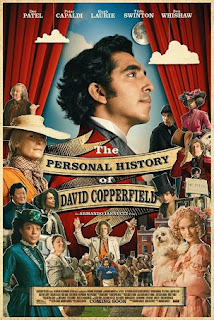 Anglo-Indian actor Dev Patel may not be the most obvious choice to play David Copperfield, one of Charles Dickens' most beloved and most autobiographical heroes. But casting the popular Patel is but one of many inspired and audacious choices made by Armando Iannucci in his smart and highly entertaining adaptation, The Personal History of David Copperfield.

Director Iannucci and his co-scenarist and frequent writing partner, Simon Blackwell, are best known for sly political satires The Death of Stalin, and TV's Veep, created by Iannucci. In their hands, Dickens' classic coming-of-age tale gets and energizing makeover that is absolutely true to this spirit of the novel. While unapologetically diverse in its casting, it never feels unduly PC, and is often brilliant in the originality of its storytelling.

The movie is framed as a theatrical recitation by acclaimed author Copperfield. (A nod to the kinds of public readings Dickens himself staged for his rapt admirers throughout his career.) As he narrates his life story, beginning with his birth, it unfolds onscreen, with the adult David popping up in the shot with commentary— one of the movie's many charmingly surreal touches.

David's idyllic childhood with his loving young widowed mother ends abruptly when she marries grim Murdstone, who arrives with his equally sour sister (an unrecognizable Gwendoline Christie). The spirited child David (Jairaj Varsani) is banished to London to work in a grimy factory. He's a teenager (now played by Patel) when he learns his mother has died, and walks all the way to Dover to throw himself on the mercy of his only relative, the formidable Aunt Betsey Trotwood (a delightful Tilda Swinton.)

Peter Capaldi is droll and wistfully philosophical as the impecunious Micawber, and Hugh Laurie is wonderful as the mostly befuddled but sometimes gently insightful Mr. Dick, Aunt Betsey's distant relation. He and David share a love of writing things down (David obsessively records his life in notes and sketches), giving the filmmakers ample opportunity to weave Dickens' delicious prose into the fabric of the movie. Ben Whishaw is unctuously oozy as conniving Uriah Heep, although there's not enough time to convey the full menace of his crimes. Aneurin Barnard is impressively grand as Steerforth, David's elitist schoolfellow, but he seems more of a poseur than genuinely charismatic; David's attachment to him never quite feels earned.

Meanwhile, the narrative strides boldly forward through Dickens' busy plot, hitting most of its emotional  high notes, yet boisterously funny throughout. Quick and clever editing keeps the pictures moving with smooth dissolves and ingenious expositions. When David falls instantly in love with porcelain, childlike Dora (Morfydd Clark), daughter of the lawyer who employs him, he sees her face painted on a pub sign in the street, and her blonde curls adorning a passing cart driver. To keep the narrative moving, the filmmakers even have the nerve to write out a key character, at her request. ("I really don't fit in.") I doubt if Dickens would approve, but it's a smart way to keep the movie's tone consistent and focused. 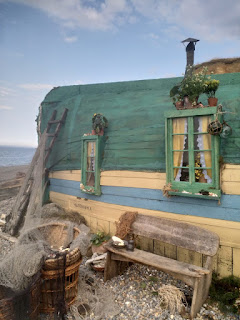 The movie looks terrific, from teeming London streets to the fresh, open countryside to the seaside. Motherly Peggotty (Daisy May Cooper), David's former nurse, lives with her family under the upturned hull of a boat on the beach at Yarmouth. (A magical place vividly realized by production designer Cristina Casali.) In addition to the Micawbers, Aunt Betsey and Mr. Dick, David's surrogate family includes his aunt's tippling but well-meaning solicitor, Whitfield (Benedict Wong), and his daughter, Agnes (played with good-humored warmth by Rosalind Eleazar).

Patel plays David with the right balance of open-hearted exuberance and dawning maturity. The non-traditional casting also highlights the story's core question of identity. David earns many nicknames on his journey through life — Davy, Trot, Daisy, Doady — which are more expressions of who others need him to be than who he actually is. It's a nifty little victory when this David finally discards his nicknames to proclaim himself simply David Copperfield— the hero (at last) of his own life. 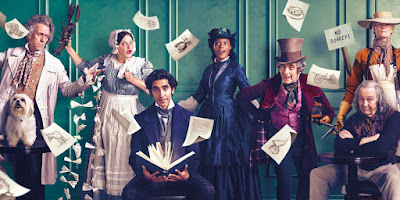